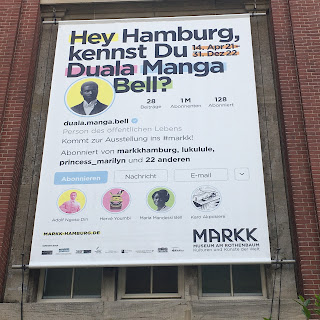 Since the end of World War II, Germany has been grappling with the consequences of the Holocaust. Since about ten years, the country has also started facing its colonial history, especially in Sub-Saharan Africa.

Germany started controlling territories in Africa in the 1800s, mostly after the "Scramble for Africa" initiated by Bismarck during the 1884 Berlin Conference, when the continent was divvied up among European countries. Germany annexed territories in present-day Cameroon, Togo, Ghana, and Namibia. After World War I, they lost most of their colonies, which were taken over by France and Great Britain. The Germans were brutal in their rule and committed genocide in Namibia in 1914. 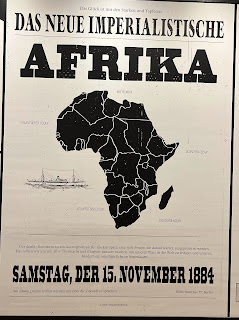 Until a few years ago, German city streets often carried the names of German colonizers, such as Petersallee in Berlin, dedicated to Dr. Carl Peters, who set off to start colonizing Eastern Africa in 1884. After the Berlin West Africa Conference, he was named Chairman of the German East-African Society. In 1897 he was condemned for his harsh treatment of Africans, and stripped of his title of commissioner to the (renamed) protectorate of German East Africa. However, Wilhelm II exonerated him; Hitler lauded him as a hero, and named the street after him.

More recently, an exhibition at the Ethnological Museum in Hamburg (MARKK) highlights, in an educational way, targeting youth, the story of Rudolf Douala Manga Bell, the Duala King from Cameroon who protested the German land grab in Douala, Cameroon; in retaliation, he was executed along with his friend Adolf Ngoso Din in August 1914. The exhibition is called: "Hey, Hamburg, do you know Duala Manga Bell?" and runs through December 2022. 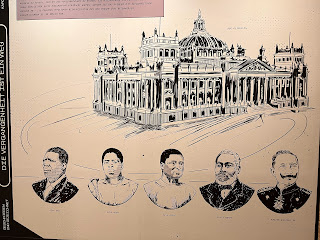 Douala Bell spent part of his teenage years in Germany, attending German schools and hosted by a German family. He returned to Cameroon and was viewed as a rather odd person, due to his European habits. Nevertheless, when his father passed away, he inherited the Bell throne. At the time, Douala was divided into three chiefdoms: the Bell, the Akwa, and the Deido. The Bells and the Akwas had signed a treaty with the Germans in 1884, but had assumed it was a mutual cooperation treaty, and not an invitation to be colonized.

The MARKK exhibition shows not only Rudolf Douala Bell's story but also the commercial benefits that Germany, via Hamburg businesspeople, enjoyed through the importation of raw materials from Cameroon: cocoa, coffee, palm oil, ivory and more. It describes the history of Douala during the German colonial period and in later years. 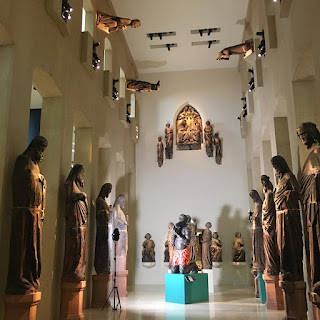 Another exhibition about German colonialism is being held at the Freiburg Augustinermuseum, named: "Freiburg and Colonialism: Yesterday? Today!" (through June 11, 2023). The permanent exhibit at this museum is religious art: gargoyles, sculptures, stained glass, and paintings from past centuries, fascinating in its own right. I for one have never seen such a variety of religious (Christian) art in one place before.
This exhibition started with a "preview" of sorts: a sculpture by the German-Nigerian artist Emeka Udemba, right in the middle of the European statues from centuries past; it was quite the juxtaposition!
At the nearby Ethnological Museum was another colonialism- and racism-related exhibition, that covered many regions around the world.
The complete exhibition opened in June 2022, and showed the history of German colonies, the products that were traded, shops in Freiburg that carried these products, and an entire room dedicated to Namibian objects and history, including the story of the genocide that killed thousands of Africans, from 1904 to 1908. It took Germany a very long time to admit to this shameful part of its history; it happened well before the Holocaust; the genocide was finally recognized in 2021, over a century later.
There are also interactive exhibits with which you can test your prejudices and political correctness (in German).

Almost concurrently, there is an exhibition at the Museum Natur und Mensch ("Nature and Human"). It is called "Handle with care – Sensitive Objects of the Ethnological Collection" and it includes objects from all over the world, and some are missing (with an empty space) to show that it has become inappropriate to display these objects. As per the web page, '“Handle with care” explores the ethical and practical issues that Freiburg’s Museum Natur und Mensch is dealing with and thereby supplements the exhibition in the Augustinermuseum.' 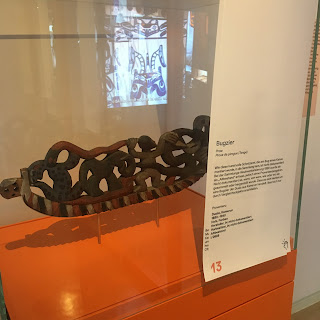 Interestingly, even in the Museum of Modern Art in Freiburg, a title was removed from a sculpture because it was politically incorrect. We can only try to guess what it said before; there is no new title. 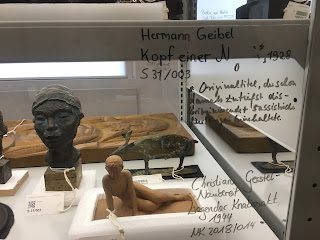 I wouldn't be surprised to find out that there are more exhibitions in this vein in other German cities. It is the current "Zeitgeist" and it is a very positive development, even if it is impossible to cancel out the harm that was done in the past. At least it is acknowledged.

Note: Nachtigalplatz (named after the Commissioner for West Africa Gustav Nachtigal) in Berlin will most probably be renamed after Emily and Rudolf Duala Manga Bell.

Note: The Freiburg Museum of Modern Art also shows empty spaces where there used to be paintings that were removed by the National Socialist (Nazi) regime.

"Fun fact" - I am reading a German novel called "Die ferne Hoffnung" ("The faraway hope") by Ellin Carsta about a Hamburg family who buys a cocoa plantation in 1888 Cameroon, at the time under German colonial rule.

Another fun fact: There is a short film about the life and death of Douala Manga Bell called "The German King." The director, Adetokumboh “Ade” M'Cormack, is working on a series on the same subject. Ade is originally from Sierra Leone and now lives in the United States. One of the advisors is Princess Marilyn Douala Manga Bell, a descendant of Rudolf Douala Manga Bell. 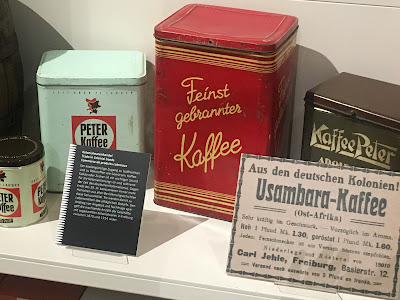 Another link to peruse: