February 07, 2016
In December, I was invited to a weekend of festivities in Bamendjou, West Cameroon. The occasion was the honoring of my friend, Jeanne Ntopa, to the title of Mafeu. This title appears to have been the title for the Queen Mother, but as I understood it, can now be given to women who have done much good to their community and thus are elevated to Queen Mother status.
Among the Bamileke from the region called the Grasslands by the German colonialists, there are many (related) languages. Thus the language spoken in Bamendjou is only barely understood by our Mafeu's own spouse, who is from the Dschang area. I understood nothing at all on the first day; however, I could sense the joy and pride during the Mafeu's neighborhood community celebration.
On the second day, the Bamendjou traditional chief, in this title since over 60 years, spoke in French as he acknowledged the fact that there
were several visitors from other areas - whether next door Dschang, or far away United States, via Douala! He is an especially fascinating person, as he speaks perfect cultured French, but I was informed that he had not attended formal school and is self-taught.
Beyond the wonderful traditional architecture, I was fascinated by the array of colorful outfits worn by both men and women. Below an assortment... 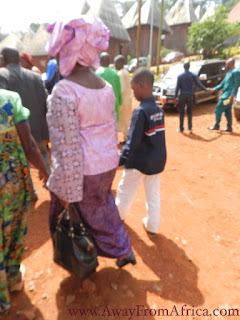