Showing posts from February, 2012
Show all

Lunch at Sita Behle's in Souza 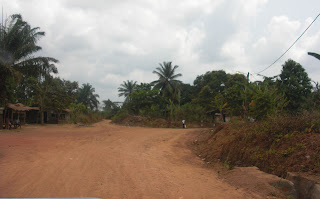 The road to Souza While we were in Cameroon in February, I finally traveled to "Abo," the region where my mother-in-law was born. Unfortunately we were not in her village in the northern part, but in Souza (Abo-Sud) to visit the cassava crop farm I wrote about in an earlier post . Sita Behle In Souza, we met Sita* Behle, who welcomed us with a big smile. Not knowing visitors were coming, she had not dressed up or anything, but that was the least of her worries! When I asked if I could take her picture, she readily agreed. By the time we finished visiting the cassava crop farm, it was incredibly hot, and it was lunchtime. Souza's "green house" Sita Behle's house is the original "green" house--the exterior wall is covered with greenery, an unexpected sight. I was standing outside and realized that everyone else in my travel group (5 people in all) had entered the house, so I followed them inside. Palm nuts Sita was in her kitchen
Post a Comment
Read more Koko in the Doual'Art garden In 1987, when I was living in Cameroon and practicing as an architect with my spouse, Epée Ellong, we were asked to rehabilitate the cafeteria of the University Center of Dschang in West Cameroon. It was a Soviet-style building, squat and chunky; the Soviets were not present in Cameroon any longer. Epée Ellong redesigned the exterior to reflect the region's artistic heritage by creating African masks using marble residue. I don't recall how we met Koko Komegne, but we heard that he was a talented painter. We commissioned him with painting frescoes in the cafeteria interior--which he did in record time. The eleven frescoes are based on a jazz theme--another of Koko's passions is music. University Center of Dschang cafeteria It had been years since I last saw Koko Komegne. Fortunately a few years ago I read about him online. He is still living in Douala, and I obtained his cell phone number. (In Cameroon, most people now
Post a Comment
Location: Douala, Cameroon
Read more

With our cousin's mom, who is wearing  a traditional Duala Kaba. Finally I returned to Africa in January--not for good (yet), but at least I was finally able to go. I'll be writing several posts about the trip, which only lasted 2 weeks, but was full of food (lots of food to catch up!), travel, and meeting with old and new acquaintances. I'll also update older posts with additional photos. Here is a photo of our cousin's mom with me.
Post a Comment
Location: Douala, Cameroon
Read more
More posts