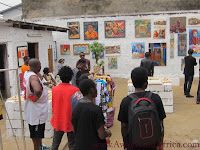 Contemporary visual art is not only to be found in the upper scale neighborhoods of Douala. Désiré Pemeyeke, alias Mboko Lagriffe, recently held an art gathering in an out of the way neighborhood – in fact, so out of the way that we got lost trying to find it, and I was with a person who knows Douala’s meandering streets by heart. The gathering is named Barbecuexpo: no wine and cheese for Cameroonians! Grilled fish was the featured attraction.


The setting was humble – a courtyard with a dirt floor – but one large wall was covered with the creations of several local artists, including the host himself; and an assortment of fabric bags, mugs, clothing, a table made with old tires, and sandals; packaged hot sauce, and a fruit smoothie stand held by a young lady named Eugénie. Mind you, this is not a country where there are a lot of smoothies, even less with beet juice included!
Despite the distance from “Main Street, Douala” – not that we have a Main Street, with about 4 million inhabitants – there was a diverse mix of guests, including a contingent of American teachers from the American School. 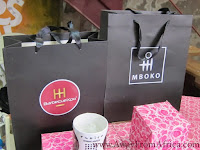 It was a very pleasant afternoon, and there were some wonderful inexpensive gift items for around $20; paintings/collages were sold at the price of 150000 FCFA (less than $300) each.
In case you wish to order something – you can reach Mboko Lagriffe at mlagriffe@yahoo.fr.  (And no, I don’t get a percentage of sales!)


Table and sandals created by Christian Penn Tang.
Below photos of some of the art and gift items.
In fact, even the grilled fish was artistic, served with plantains, "bobolo" and special sauce. 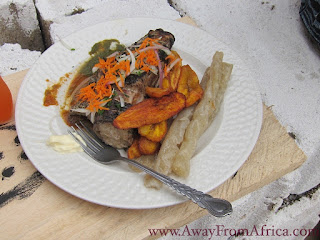