August 22, 2018
The Viaduc des Arts in the twelfth arrondissement in Paris now houses cafés and chic shops, including the Lilikpó workshop managed by Sika Viagbo.

Walking by, the first thing you notice is the originality and the beauty of the creations through the store window.

It's a workshop visible from the street: the designer, Sika Viagbo, works on her creations in front of passersby eyes.


Before starting her own company, she worked with Pierre Mesguich (Paris), an internationally known mosaic designer, who has worked all over the world. Sika also interned separately in Tokyo and in China.

The company's name means "cloud" in Ewé, one of the languages spoken in Togo, where her parents immigrated from. Her own design influences are multicultural, inspired by her travels and experience.

How did Sika get started in this profession?
She grew up in Vitry sur Seine, a Paris 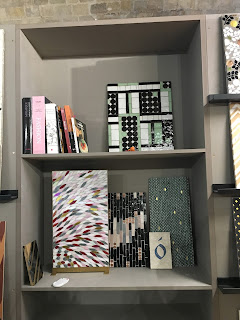 suburb. As a music major at the University of St. Denis Paris 8, she discovered the art of mosaic making, and at first made it into her hobby. One of her friends saw her work, and put in an order for decor for a relative's hairdressing salon. At that junction, Sika decided to make it her profession.

After interning at Pierre Mesguich, she studied architecture for two years, in order to better understand interior design construction sites, as her main customers are architects, interior designers, and decorators. At the outcome of these two years, she opened her own workshop.

Her inspiration? Fashion, textiles, embroidery, art exhibitions... everything in her surroundings... it is hard to pinpoint exactly what influences the final product.

WIshing Sika and Lilikpò all the best, competing in one of the world's design capitals, Paris!