August 03, 2014
In Montréal, Canada, for a few days, we were pleased to note how many Francophone Africans are living in this French-speaking city, and how active they are in its cultural life. Montreal is a calm but also a very international city, boasting denizens from all over the globe, including many from France, the Middle East and Africa. 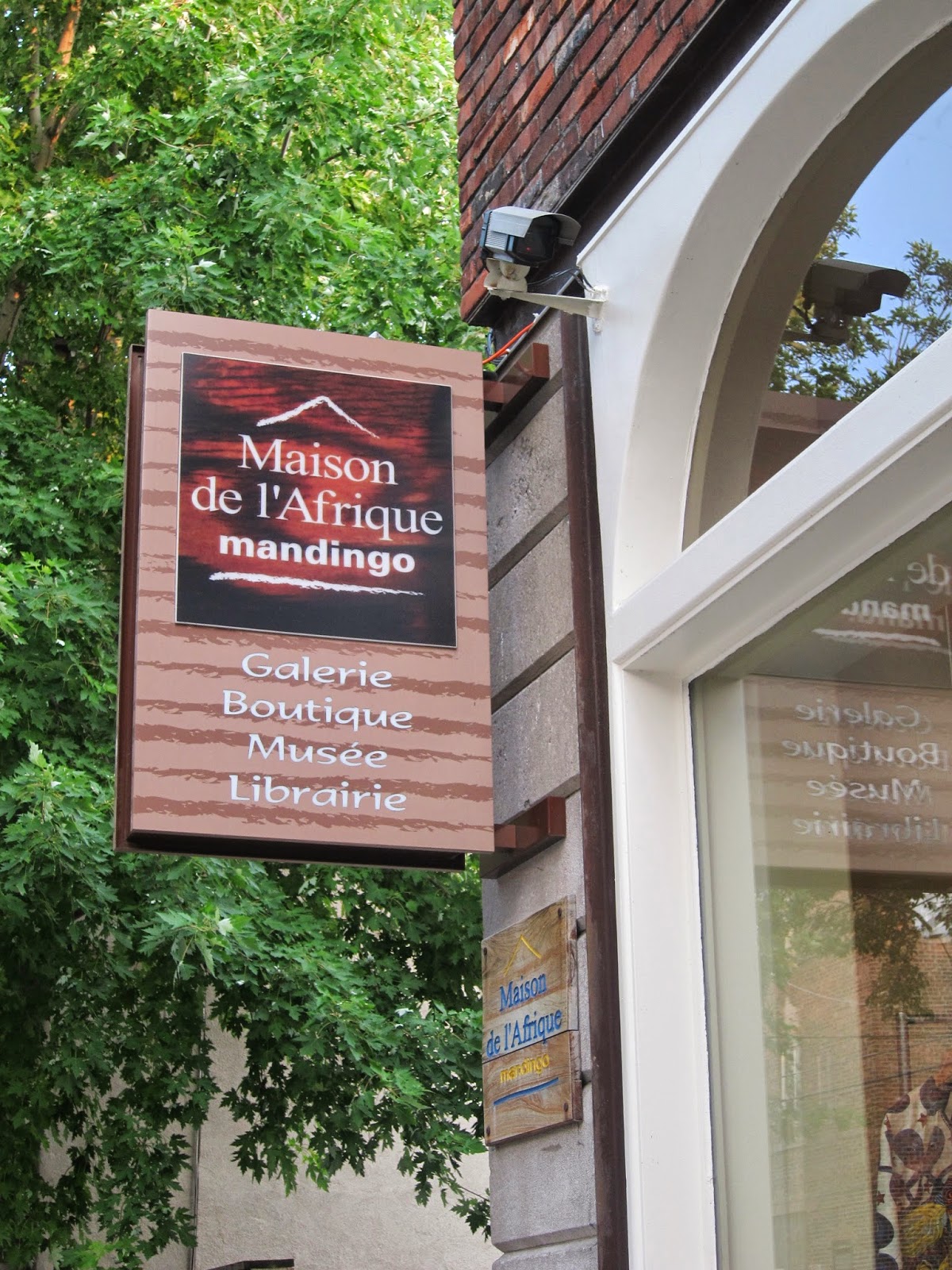 The soul of African cultural life lives in the Maison de l'Afrique Montréal. This African cultural center, in a house located in a quiet neighborhood, was founded in 2004 by Mariam Sy Diawara, originally from the Ivory Coast. The Center's doors opened in 2009. The center's mission is to act as a link from the Americas to Africa, to promote African culture and history, from all over the continent. There is also a tourism component and assists African immigrants in their integration in Canada.
When we visited in July, Ms. Diawara was in the Ivory Coast, but we met several team members: Cheick Cissé, Administrator, Moussa Xlim Diawara, communications and events manager, and Marcelline Ouedraogo,  store manager.
On a Saturday evening, the event featured was an "Iftar" potluck dinner (breaking the fast for those who were in the middle of Ramadan) and a modern traditional-style tale told by Gisèle Ndong Biyoko, a Canadian of Gabonese origin, married to a Cameroonian (we met her spouse in another setting, without knowing that they were a couple!).
There is an exhibit of African sculpture, a café area downstairs, a banquet space, and an outside yard. 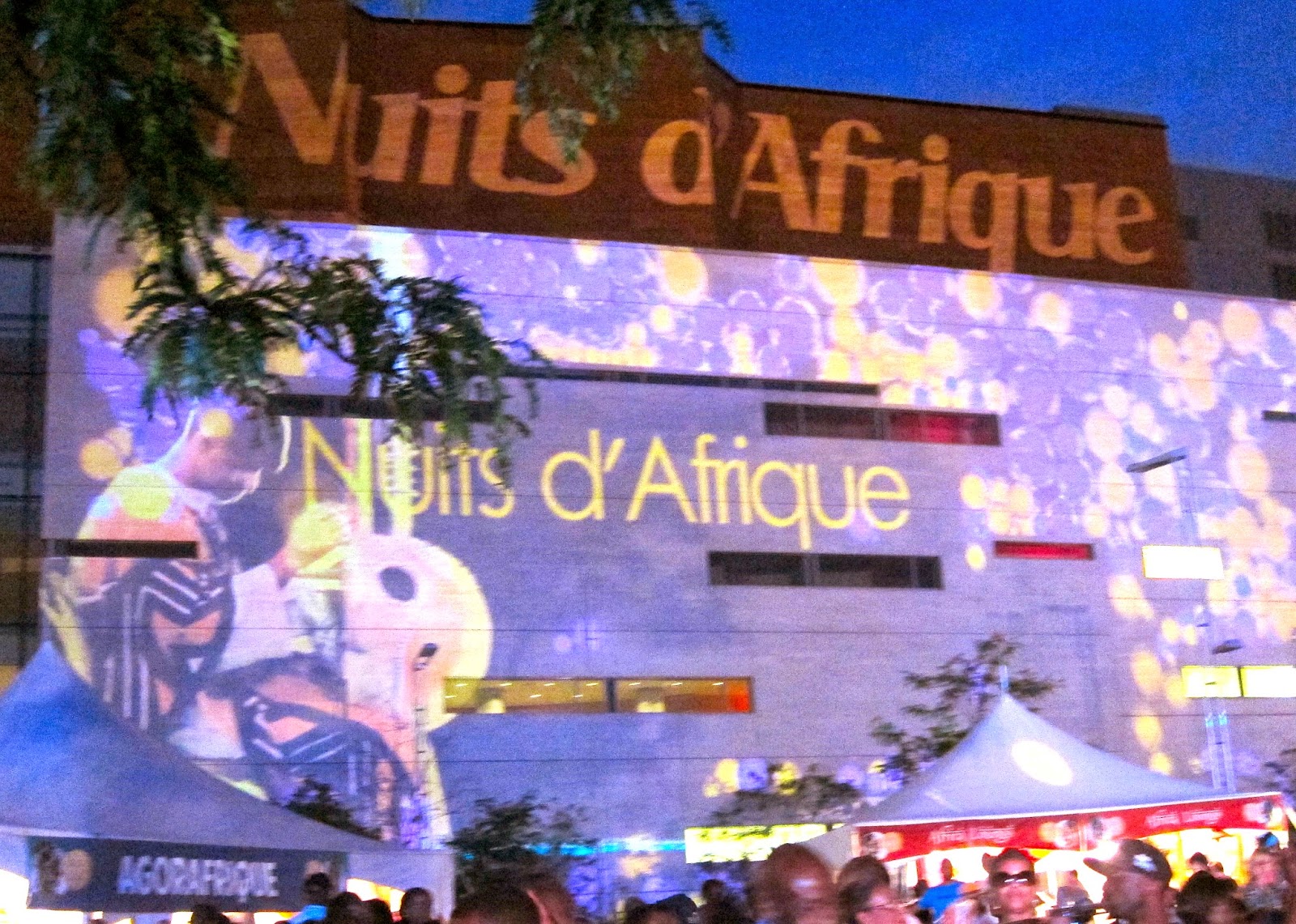 In the summer, outdoor festivals abound in Montreal, as people are indoors for much of the long and cold winter months. One of the festivals, in its last days during our stay, is the Nuits d'Afrique music festival. Not only are there several (free) concerts every day, in the Quartier des Spectacles, but also other concerts throughout the city, and a marketplace for clothing and gift items from Africa. One can purchase CDs from each of the past years of the festival.
We attended the last concert, of Tabou Combo - the African diaspora in Haiti, in action since 40 years! 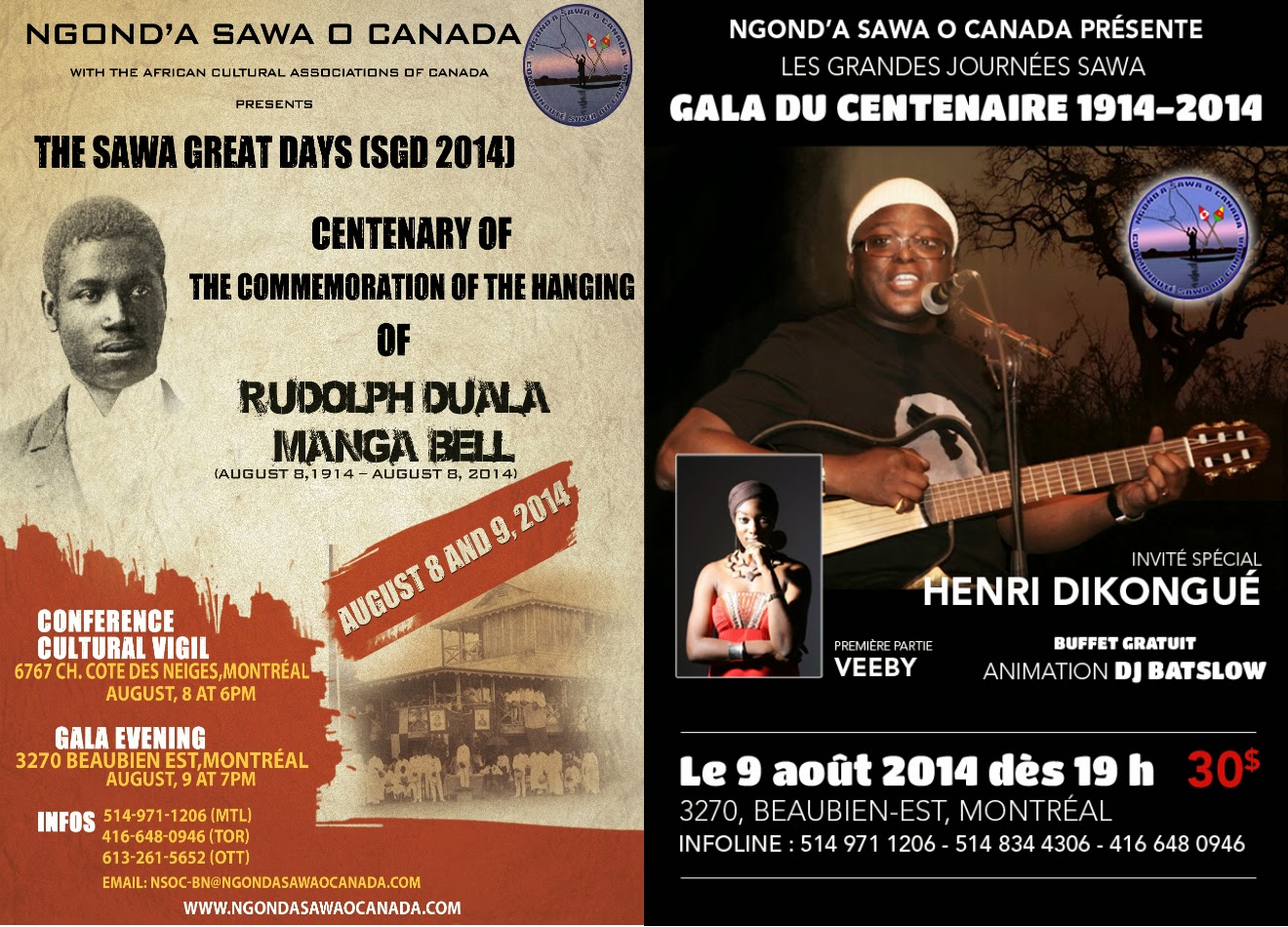 Media and specifically online media is not left behind. We met Cyril Ekwalla who is the founder of Njangui Press, an online media outlet.
Cameroon Voice covers Cameroonian news and culture, as well as news from other African nations, and includes a radio station.

August 8 marks the 100th anniversary of Rudolf Duala Manga Bell's execution by the German colonizers in 1914. There will be a commemoration in Montreal. Rudolf Duala Bell rebelled against the German land grab and harsh reign in Cameroon, which was a German colony before the end of World War I. As it so happens, in our increasingly globalized world, one of his descendants, Florence Doualla-Bell, Ph.D, lives in Montreal, and will be present at the event. Cyrille Ekwalla is one of the organizers.

And I should not leave out food: on Chemin Queen Mary, a block away from the Snowdon subway station, there is a restaurant that resembles a Chinese fast food restaurant, named Hot Africa. The service appears tepid, but the food is great: a slightly garlicky n'dolé (typical Cameroonian dish) and grilled fish, both served with excellent fried plantain slices. Across the street is a store selling fufu, red palm oil, dried shrimp and more, called Marché Mokolo (the name of a market in Yaounde).

Below are more photos of the Maison de l'Afrique. 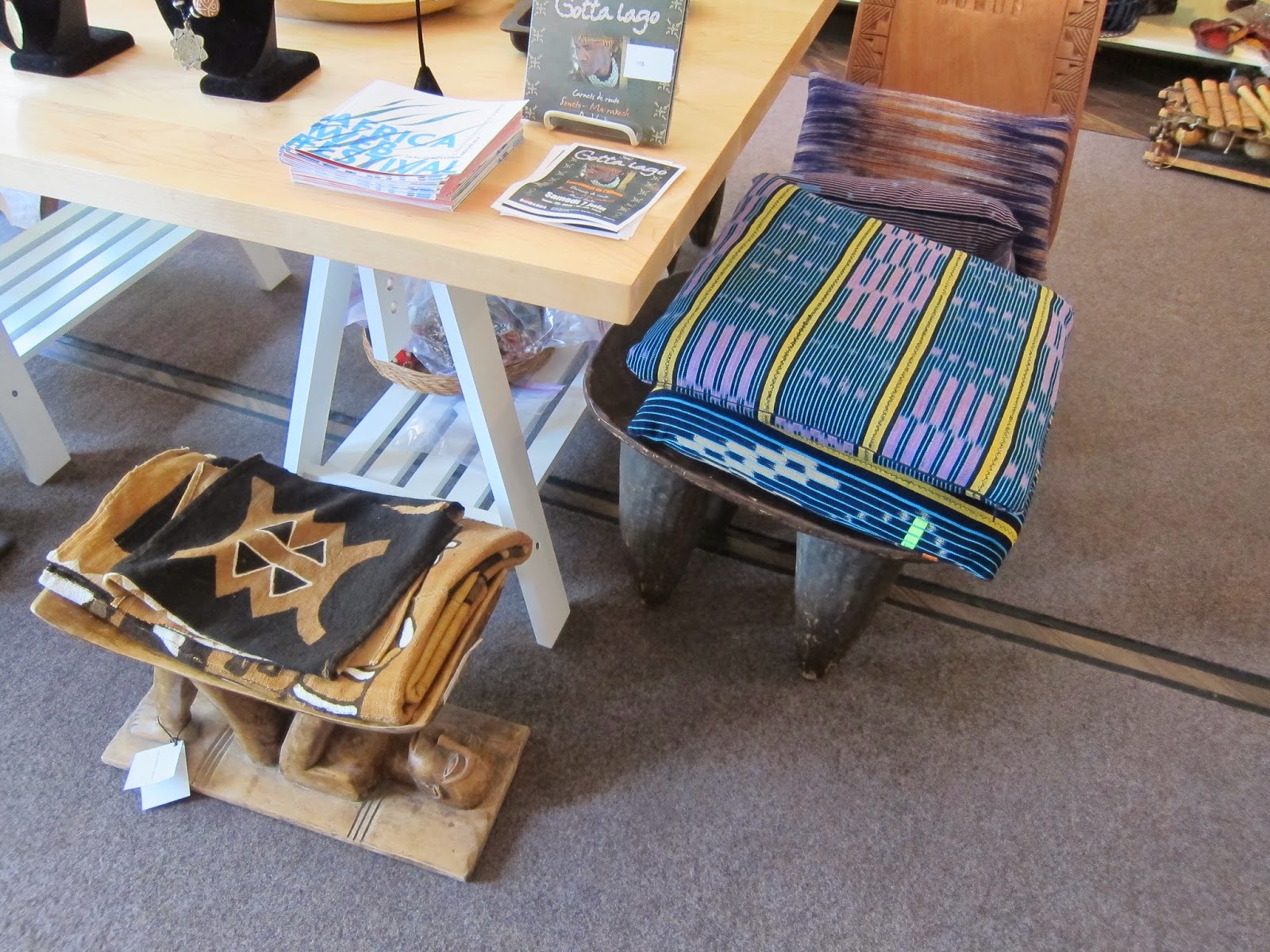 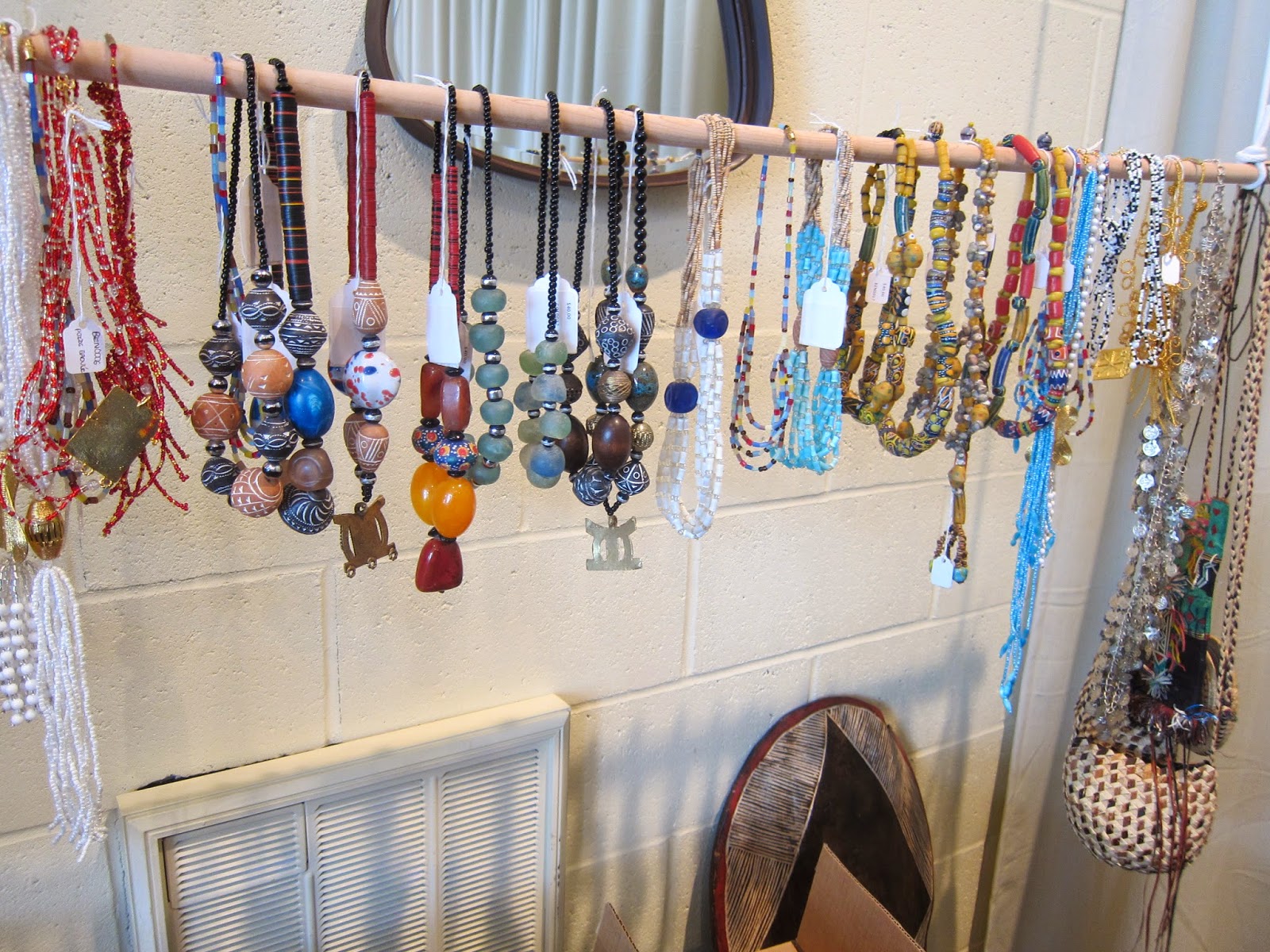 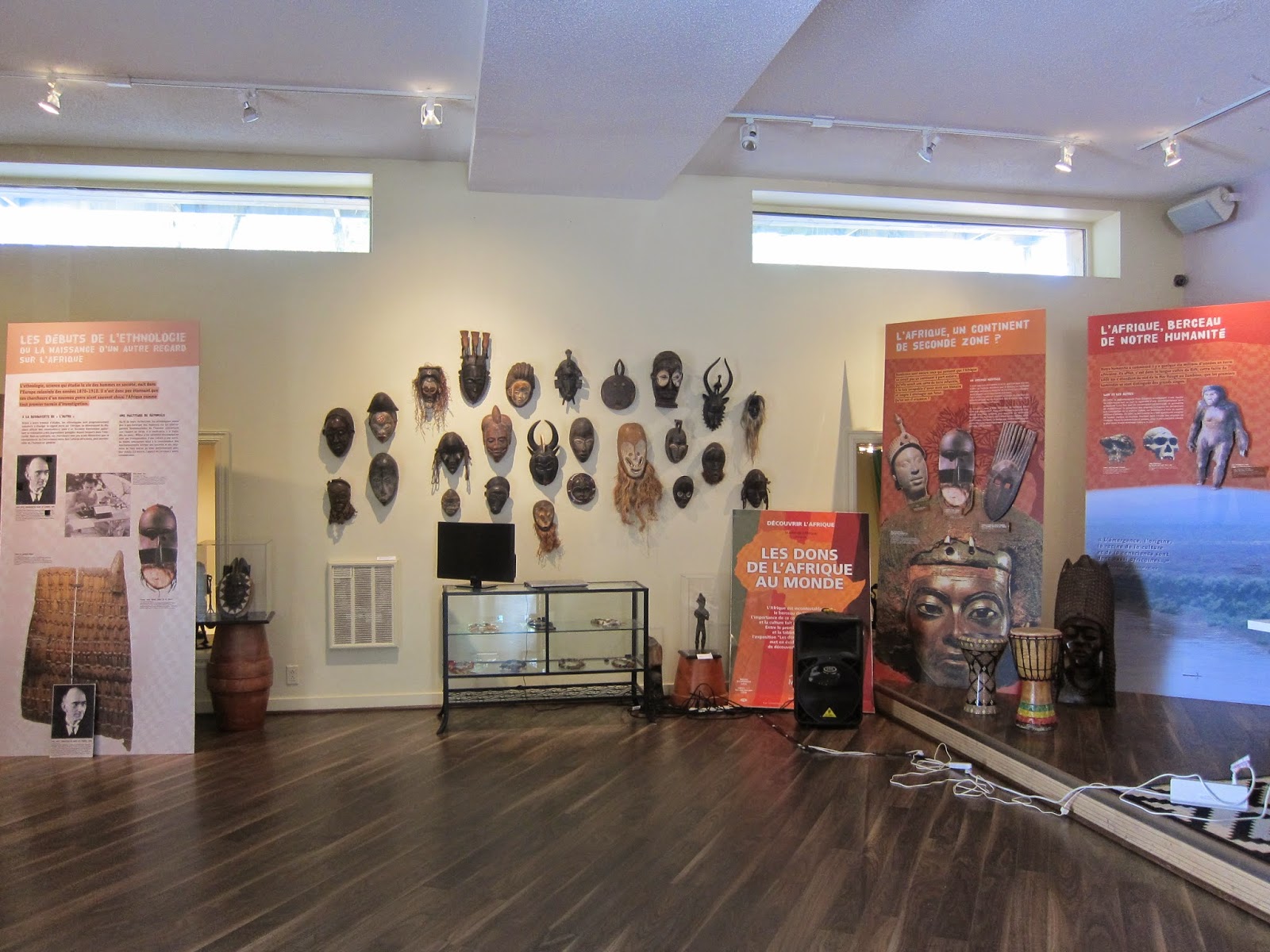 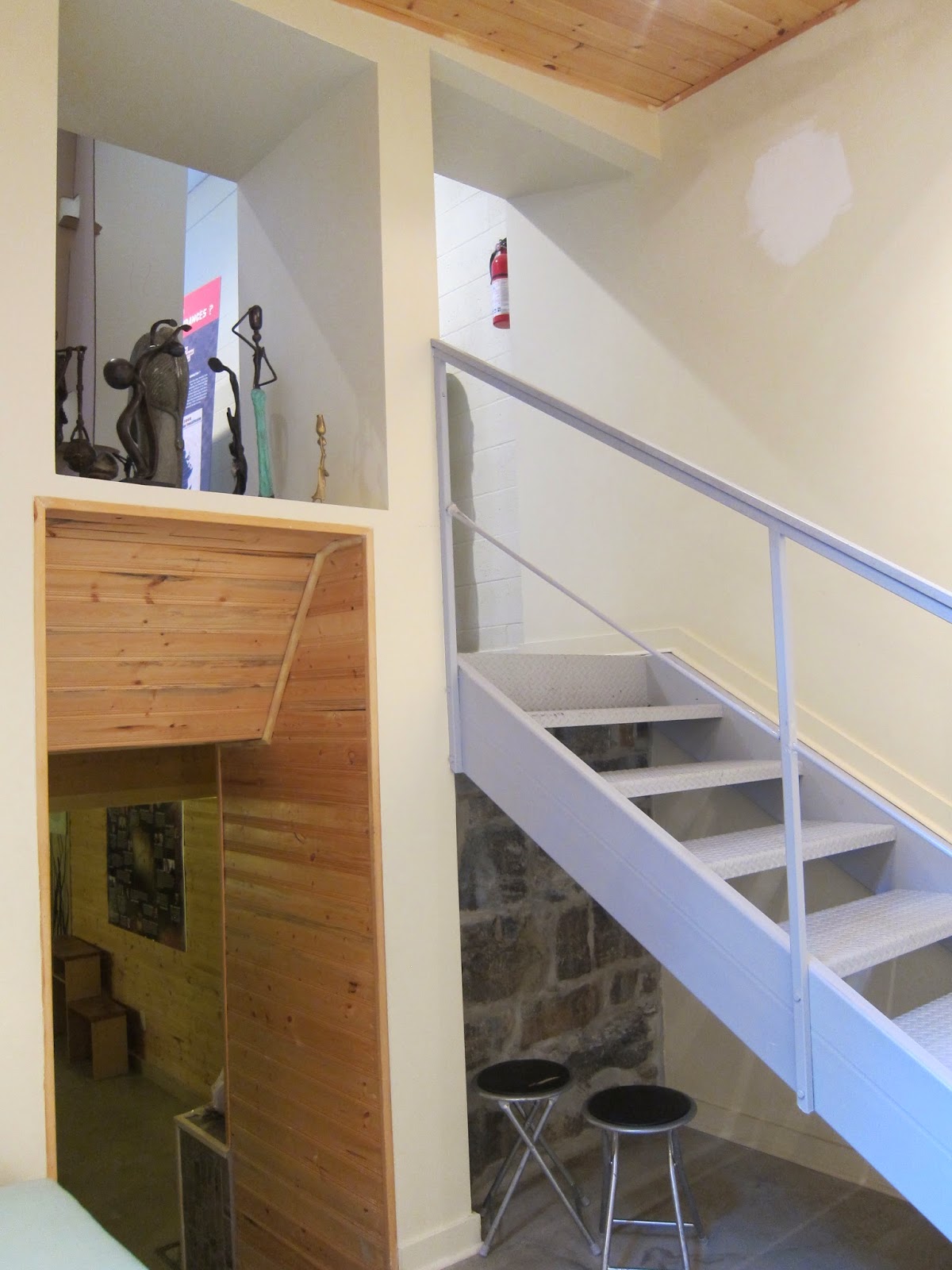 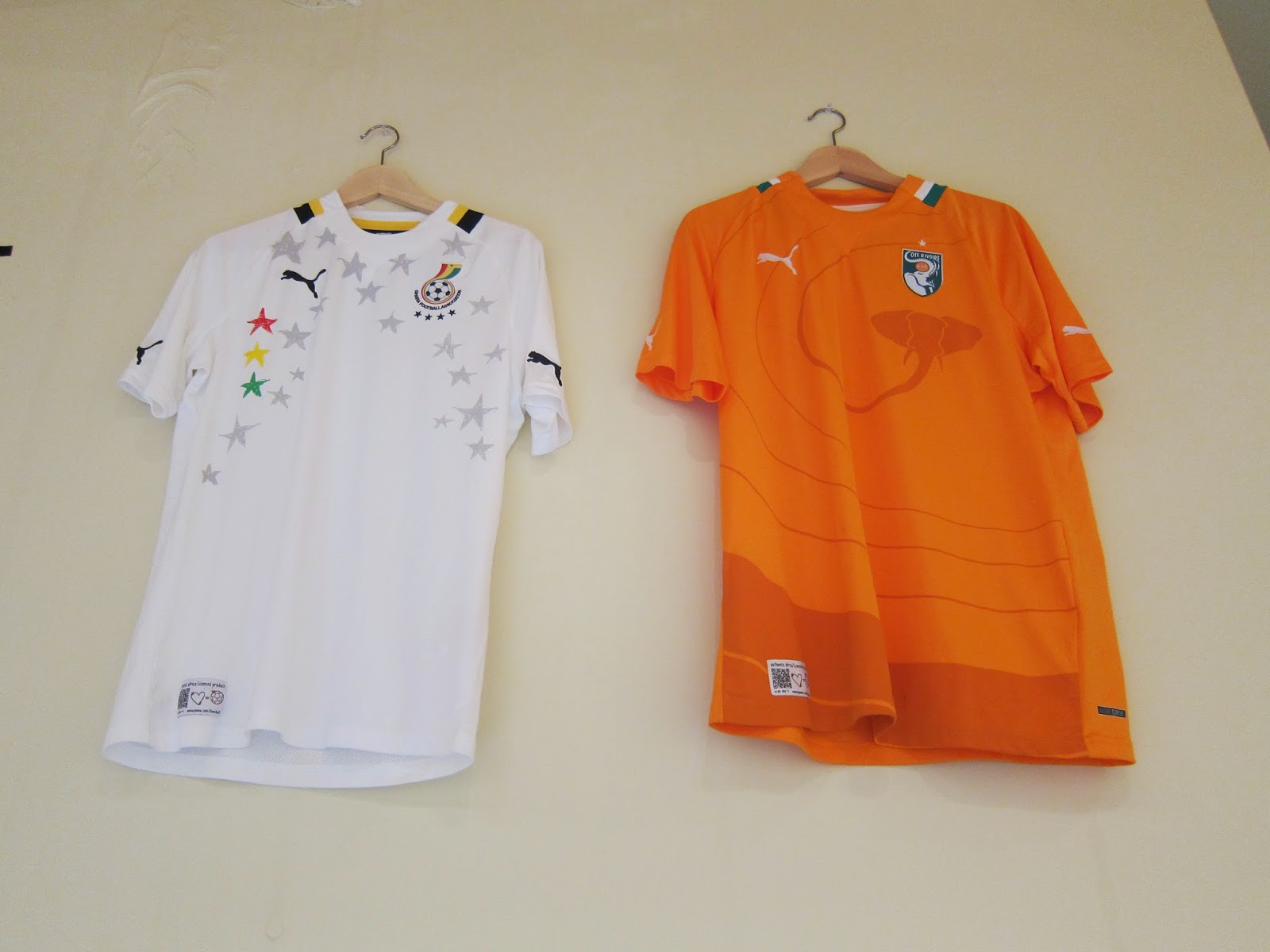 Left and below: Football shirts from the African teams who competed in the FIFA 2014 World Cup in Brazil. 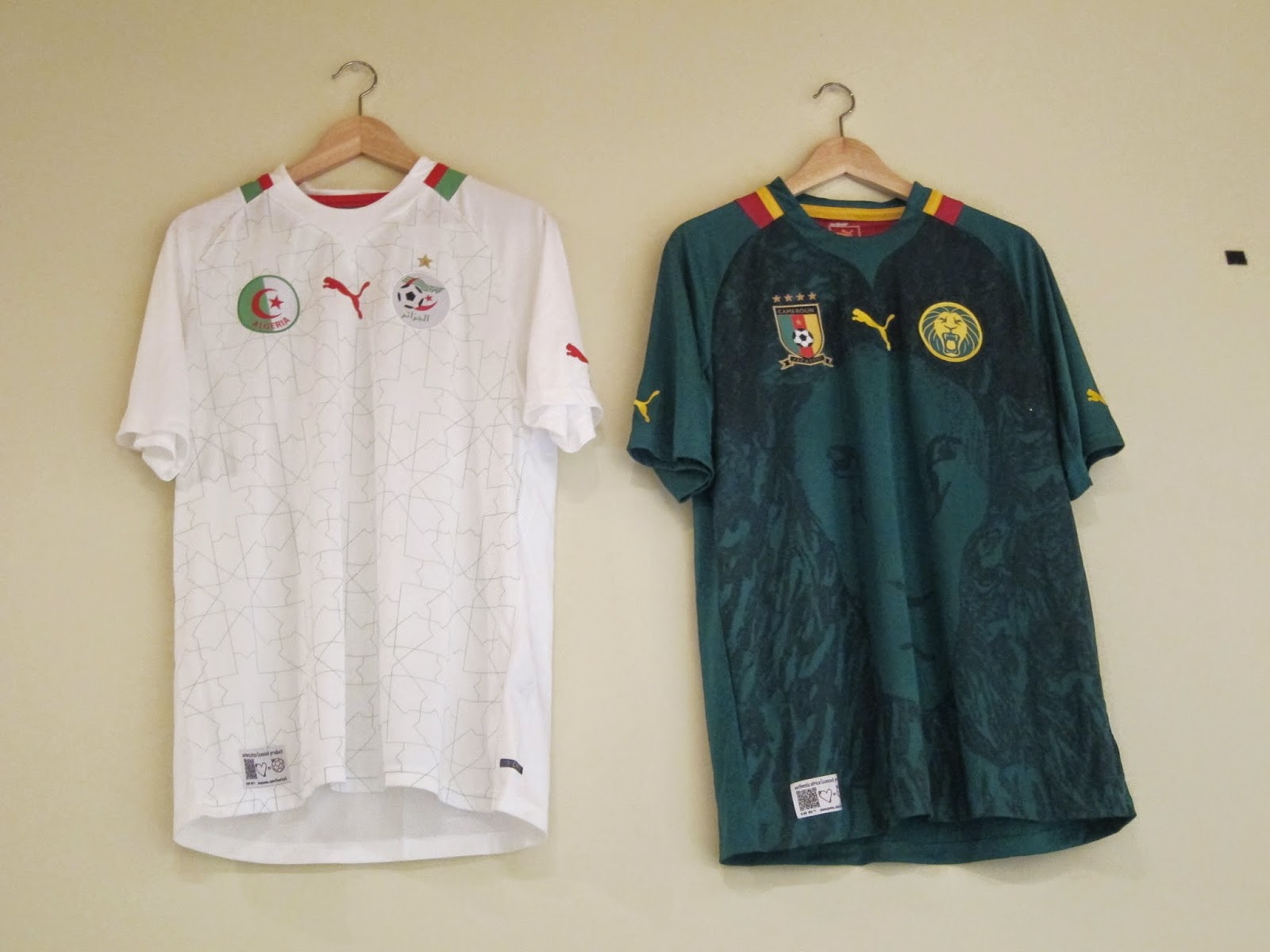 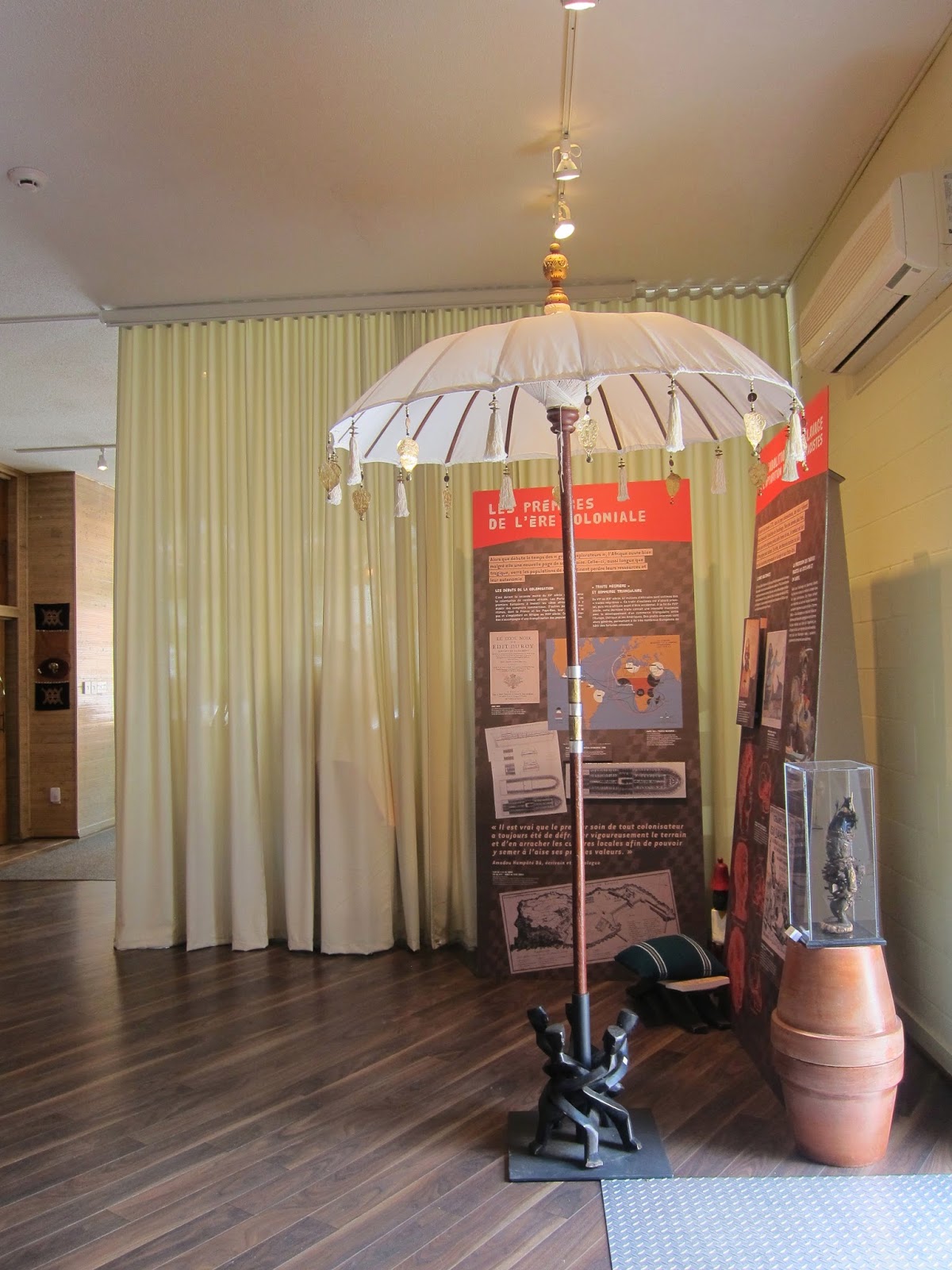 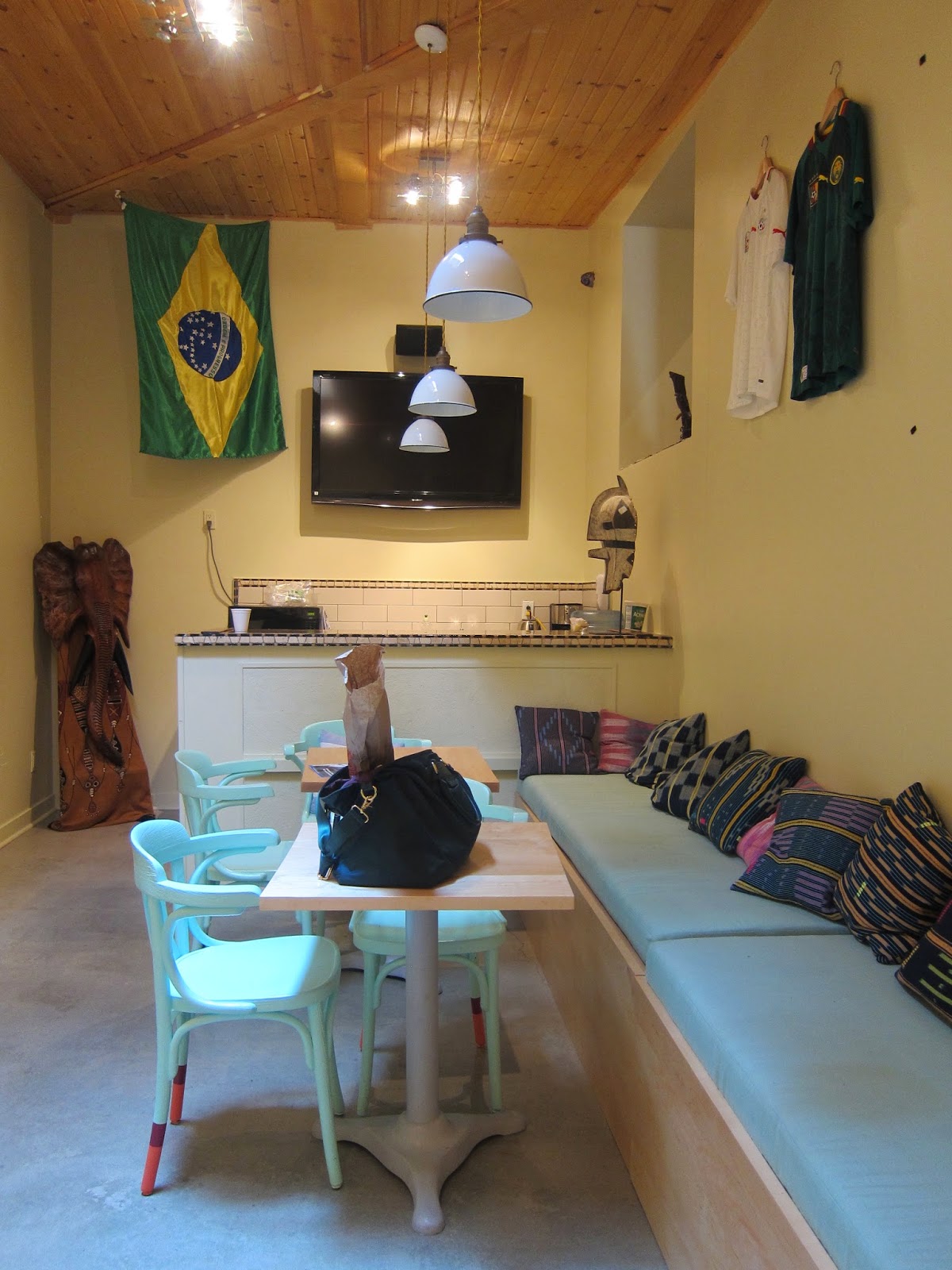