Cassava is known in French as Manioc, and here in the United States often as Yuca. It seems it originated in South America, but it is widely grown in equatorial Africa. In Cameroon it is a staple, and the most common and popular use is Gari, a sort of coarse tapioca; mixed with water, sugar and peanuts to make a filling snack or meal. In fact, the way most Europeans know Cassava is through tapioca pudding!
A field was planted by a friend in Abo, Littoral region, two years ago, and finally the cassava roots were harvested in November/December  2010 (a warm and dry time of the year). Our very trusted friend Guérin supervised and participated in the harvest and the making of Gari from beginning to end, and sent us photographs of the process.

After the bags of finished Gari were filled, they were sold at the market in Sousa, about an hour away from Douala. This tiny venture created a few temporary jobs, at least! 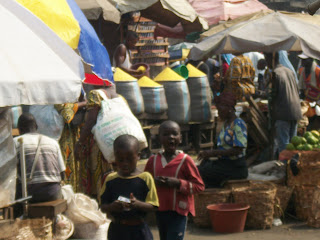 Other uses for the Cassava root are miondo, a perennial Duala favorite, written about in an earlier post about Cameroonian food.
Our Latin/Caribbean-American community here in the United States enjoys Yuca fries, and Cassava bread is made in the Dominican Republic. Leaves are used in stews similarly to spinach. More is found about other countries' uses on the Wikipedia page.