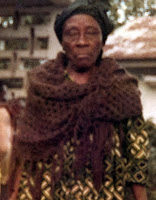 Ma Emilia was my spouse's maternal grandmother. Unfortunately, I did not get to know his paternal grandmother, as she died when my husband was a teenager. I did, however, have the good fortune to spend many years with Mama Emilia.
Emilia was from Abo, a group of villages in the Littoral region. The Abos are of a similar ethnicity as the Dualas. Unfortunately, it was very difficult to get there, and in 12 years, I never visited. She spoke Abo, Duala, and Pidgin English, but no French or English. We communicated through sign language and translators, until I learned enough Duala to get by.
She was raised in the village of Besunkan, in the Abo region, and moved to the village of Banseng when she married. Her husband spoke fluent German; at the time, Cameroon was a German colony.
After WW I, Germany, having lost the war, also lost its colonies, and the French took over Cameroon as part of their mandate. Those Cameroonians who spoke German were not dealt with tenderly, speaking euphemistically. The couple moved to Douala to escape persecution, to Bona'Ntone, part of Deido (one of the original three villages forming Douala). Emilia brought along her two younger brothers; their parents were deceased, and she acted essentially as their mother.
Both brothers received an education; the eldest was one of the first "clerks" at the SHO French commercial organization. The second brother studied medicine, and had almost finished, when he had a health setback.
My father-in-law noticed Emilia's older daughter, who was very pretty and fashionable, and fell in love.
By the time I arrived in Cameroon, Ma Emilia was living in our family compound, in my father-in-law's house. Her second daughter lived in another neighborhood; my mother-in-law was her eldest.
I'd try to grow some plants in our rather thankless garden; I'd come out in the morning and find her pulling out my shoots. We'd get into an argument with whatever language and hand signs we could muster; Bello, my brother-in-law, would come running over to translate, and told me she considered my plants "weeds!"
Her "vices" were her little tobacco pipe, and having a small glass of vermouth ("Martini") in our living room in the evening.
During the end-of-year holiday season, she would sit under the mango tree, in the front yard, and put her chin in her hand. When I'd ask her why, she told me that holidays saddened her, because that was the time of year both of her parents passed away.
The first time I had malaria--I took anti-malaria pills for a couple of years, but it's not very healthy to take them for your whole life--I was alone at home, and it was like a terrible flu, with someone beating you up, all at once. I was also sick to my stomach, and had to drag myself to the bathroom. She came over and remained by my side every minute; unused to company in such an embarrassing situation, I asked her to leave for a little while. She refused, saying that when she'd be ill, I'd be around too, to care for her.
When she was about 75, she decided to start a small plantation on a plot of land behind the one we were living in. She'd go every morning around 5 a.m., and bring back various tubers.
She never appeared to care that I was "white," her only concern was communication. When I learned a little Duala, she complained that I hadn't learned Abo!
It was great that she was able to enjoy a couple of her great-grandchildren. We had 4 generations in our compound for several years. That is the nice side of the African extended family (as in other parts of the world, too): no nursing homes where older people are far away from their families.
I hope Emilia is still watching over us as she used to, with the eyes of her spirit, now.