August 10, 2009
The NY Times recently had an article about a Parisian Tarzan-themed exhibit at the Musée du Quai Branly. The article reminded me of the 1984 movie starring Christophe Lambert. The Africa scenes were filmed in Cameroon. However, that fact was the not the reason my husband's cousin (an incurable romantic) and I were so infatuated with the film: we just adored the love story. The location shown in the movie, if I am not mistaken, is near Kribi, close to the seashore.* There is an area with a series of waterfalls, flowing into ponds of brackish water. It is absolutely gorgeous, as are many other places in Cameroon.
Cameroon is called "Africa in Miniature" because there's a bit of everything, geographically, from the south to the north, that you'd find in other African countries: Rain forest, green hills, savanna, waterfalls, as well as many animals such as monkeys, gorillas, lions, hippopotami, and the list goes on. 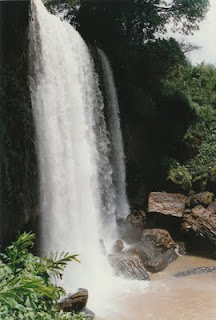 Photo of a waterfall in Western Cameroon