October 14, 2021
One of the benefits of social media is that it showcases small businesses at a lesser cost to them than mainstream advertising. From realtors to children's clothing to handicrafts from all over the world, you can find so many wonderful small businesses. In the United States, small businesses create the majority of jobs.

Ashanti Design's joyful multicolored striped bean bags and ottomans stand out easily. And the items are made from recycled fabric remnants to boot! Not only does Ashanti have great designs, but it is also a business based on sustainability on many levels, and on helping people in different parts of Sub-Saharan Africa make a living.

Away from Africa held an interview with Rob Walker, the founder of Ashanti Design, in Cape Town, South Africa.

- How did the business get started?

We used to work with an American NGO funded by USAid and other foundations, Aid to Artisans (ATA). We did a lot of work with them in Mozambique. This type of NGO doesn't always result in a sustainable system for the artisans involved. An NGO in Madagascar approached ATA to create sustainability in the fabric business. This group was interested in creating something commercially viable rather than propped up by donations. Large companies such as Zara and others have garments produced in Madagascar, and there is a lot of leftover fabric (polyester, cotton...). These offcuts of fabric come from companies that deal in what is known as "cut, make, and trim" (CMT). A fast-fashion company sends fabric to make, for example, t-shirts, to be later distributed all over the world. What's left over, after sewing, are these offcuts of fabric. In the old days, these offcuts were burned. Then they were often sent to landfills: enormous balls. CMT factories started sending the offcuts to weavers: imagine walking into a room with thousands of pieces of different fabrics: polyester, cotton... Ashanti Design offered to buy the fabric offcuts from the CMTs, on the condition that they separate the fabric into bundles of same color, same size...  to make the system more manageable. 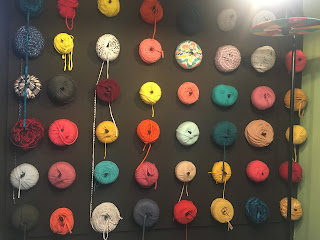 Older subsistence farmers in Madagascar, rather than work the fields, take on the job of cutting the fabric with razor blades, in progressive circles, in order to create a long strip. The strips are packed into bundles, that are then paid for by Ashanti. At this point the bundles go to weavers, who work with old-fashioned looms, and woven into sheets. We limit the size of the stripe due to the irregularity of the original fabric strips. The ensuing fabric is reminiscent of old-fashioned rag weaving, but much less chunky.
Because of the variety of the underlying fabrics used as "yarn," we use a heat-shrinking process and then fuse the ensuing fabric to a backing. The backing has millions of glue points, and the finished product can be used for just about any purpose.

We now have acquired the offcut processing side of the business, in order to better control quality.

- What is your background, Rob Walker?

I am a South African; my parents immigrated from the United Kingdom. My mother worked with charity organizations, and as a child, I used to assist her. My parents were especially involved with a school for the deaf; I often worked in the workshop where furniture was made. When I was nine, I would deliver furniture with black South Africans to the mission schools.
I used to have another business, that I sold, and financed this business with the proceeds.
What I am most known for? I'm known for my swearing, and for never wearing shoes!

- What other design products does Ashanti produce? 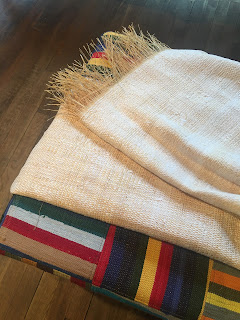 In a new line of fabrics, we mix white cotton with fine natural raffia fiber. It's a higher-end fabric, but this style is becoming increasingly popular.

We also make all-raffia-fiber fabric.
Another new style has interwoven threads of black in a mainly white weave.
Other new fabrics are tried out, some work and some don't (such as weaving with denim, in our case).

We also work in Malawi villages since nine or ten years. The then president Joyce Banda heard about our company via a South African government official. She wanted to help rural parts of her country, and also into women helping women. I went over and we developed a basket production unit. Two Malawians learned to be computer literate and operate their own businesses. It's very difficult to work out what fair pricing is when working in remote rural areas, with villagers unaccustomed to foreigners. We work out minimum monthly quantities and often pay in kind, in the products that the villagers need, such as fertilizer, blankets, pots, bicycles... In these villages, time is not money, and deadlines can be a challenge. There is no electricity in the villages, but the artisans are making lampshades, for example.
Originally, weaving was a man's activity, but now we have about 70% women weavers. However, the men still take their cut of the women's income. 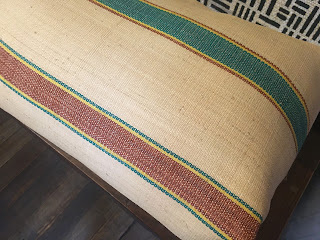 - Why the name "Ashanti Design"?

Our former company used to be called "Tradewinds," but we chose "Ashanti Design" for this venture, which is not only the name of an African ethnic group

- Where are the objects produced?

The woven fabric is made in Madagascar and exported to South Africa, where it is made into bean bags, placemats and so much more.

Things never go smoothly. We can't accept to mass produce for a company. We had offers from an expensive international retailer who wanted objects made of handspun cotton from Malawi, woven by disabled artisans. Due to my childhood experience, I really wanted to work on tis project, and had contacted a German company who would contribute natural dyes. The venture fell apart due to external factors. 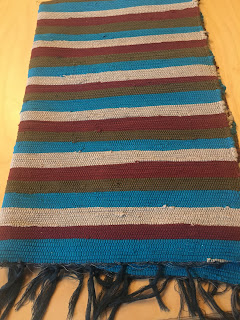 - How is employee advancement at Ashanti Design?

During Covid, we were able to train two more staff members in computer systems. Locally we have about 22 team members; in the store, 2 people, including Dady Nguéma, who is originally from the DRC.

One of our new line team members, when we took over processing the offcuts, was Amina, who had prior administrative experience. After some additional training, she has been promoted to head administrative services now. We aim to promote from within as much as possible. Another employee, originally from Gabon, was a fuser, and now is dispatch manager.

We brought in several Malawi employees, from small rural villages, before Covid, to come and see what happens to their production and view the distribution center, to store who sell the finished products.

- What companies do you work with? 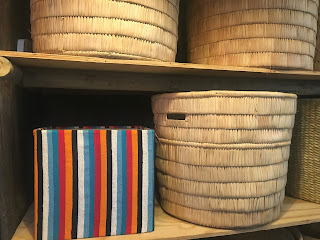 The Ashanti Design retail store is currently located at 77 Kloof Street in Cape Town, but will move to the production area at the end of the year, in Paarden Eiland. 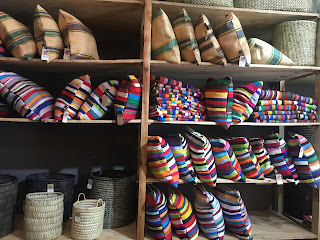 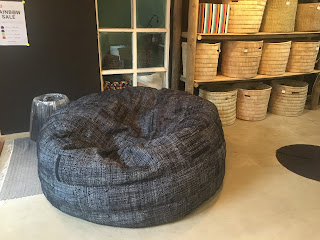