Showing posts from March, 2020
Show all

Africa-centered activities while hunkering down 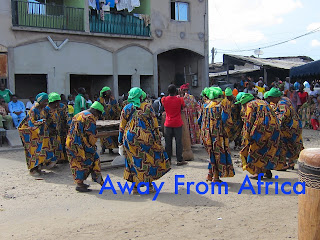 In happier days - a celebration You're home, you're bored. What activities can you do that you usually don't have time for - and you have an affinity for, or a relationship with Sub-Saharan Africa? Of course we can start with the news . Much of it is depressing - about how many cases of Covid19 are in Africa, who passed away - all sad and frightening. However there are bright spots! Among fashion designers and tailors/sew mistresses around the world, a Rwandan designer is creating masks made of African fabric. They are not medically approved, but at least there is a physical barrier. Other activities : - Submit a film to the Mobile Film Festival ! As per their site:  Founded in 2005, the Mobile Film Festival is an international Festival of short-length movies, based on an simple principle:  1 Mobile, 1 Minute, 1 Film .  And further:  The Mobile Film Festival is a  100% digital festival , thus aiming at reaching the largest audience. Yet, its  short and crea
Post a Comment
Read more

A few years ago, I wrote about Mboko Lagriffe's " Barbebuexpo " in Douala: a novel way of organizing an art fair. In the meantime, he has not been idle. He continued painting, organizing bi-annual Barbecuexpo art fairs, designing household items, but the big "coup" has been to win the competition for a new design on Royal Air Maroc (RAM) airplanes. In 2016, Royal Air Maroc organized a competition, Wings of African Art, to decorate the exterior fuselage of its airplanes. The jury president was Mehdi Qotbi, head of the National Foundation of Museums of the Moroccan Kingdom, and included artists and critics of renown. There were three winners: Mboko Lagriffe from Cameroon, the Franco-Moroccan Sara Ouhaddou, and Saidou Dicko from Burkina Faso. Mboko Lagriffe also won the public vote.  The "Love" Royal Air Maroc plane (photo: Dayot JC) The Love plane in the air (photo: Guillaume Février) Painting: Frontières Irréelles (Unreal border
Post a Comment
Read more
More posts