Showing posts from January, 2018
Show all

Fashion: Made in Africa - Zuri's "One Dress" 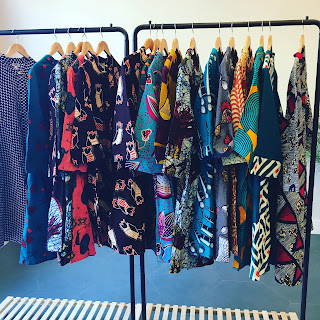 Zuri dresses in San Francisco Thanks to the internet, and the global economy, Made in Africa fashion is becoming more mainstream than ever before. Two partners had a hit on their hands when they designed and produced one simple dress, in a variety of African print fabrics:  Zuri. The company has been featured in the New York Times and the San Francisco Chronicle , among other publications. Zuri has a brick and mortar shop in New York City, but San Francisco residents got a first taste at the pop up shop, in October 2017. The dresses' reputation caught the attention of Eden Stein, owner of Secession Art and Design . Usually only local designers are featured, but her customers were clamoring for the dresses. A Zuri dress in the Secession store window In her words:  " I was at a gala for Artspan , mingling with 800 emerging and established artists, when I saw artist Soad A. Kader in her Zuri dress. I beelined to give her a compliment. She told me about a pop u
Post a Comment
Location: Nairobi, Kenya
Read more
More posts