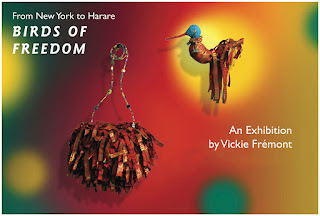 Belatedly, a post about Vickie Fremont's exhibition at HIFA in Harare, Zimbabwe.


This exhibition took place from May 1 to May 6, 2018, under the title “Birds of Freedom”, as part of the 18th edition of the Harare International Festival of the Arts (HIFA), which will run under the theme “We Count”.
Vickie Frémont , as we know from various articles and blog posts, "has been conducting workshops around the world, using a hands-on approach for the transformation of rejects or trash into useful everyday objects. Her workshops... take place in schools, community centers, universities, and even in commercial malls. They include lectures on the destructive effects that trash of every kind has on the environment and on climate change.
She has conducted her workshops using recycled materials at The Fashion Institute of Technology, The Bank Street School for Children, The Henry Street Settlement in New York City, Community Works, and numerous museums, libraries, and public and private schools" (from the HIFA press release).
And may we add that she has been on at least two tours of Peru for the Alliance Française?

The show “Birds of Freedom” included:
A map of Africa, a map of Cameroon, a country where more than 130 dialects are spoken: showing the country’s rivers and borders embroidered with trade beads, many of which have been used in the slave trade, large puppets representing some African countries with their traditional textiles (Cameroon, Mali, Kenya, Congo), and Birds and their nests: artworks similar to the puppets using recycled materials, in which beads, fabrics and recycled materials such as coat hangers, CDs, old rags, plastic containers, and cutting boards are combined; the resulting work bears no resemblance to any of the original materials. 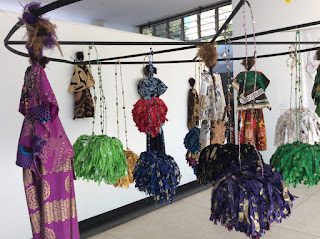 "The show Birds of Freedom is about the connection between continents, and the waves of migration. Birds don't have borders but they know how to go back to where they came from.

Many people from African countries emigrate to find jobs. The 12 birds portrayed symbolize the movement, the migration, and the central nests are the guarantee that a return home is always possible.
Vickie Frémont has an abiding passion for the art, culture, and music of Africa. Although Vickie left Africa many years ago, Africa has not left her." (from the press release) 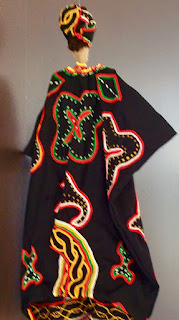 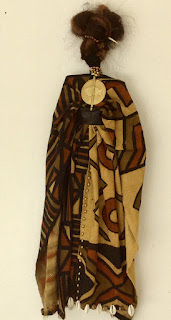