March 07, 2013
What a life trajectory. El Anatsui's work is now featured in a retrospective at one of the United States' premier museums, the Brooklyn Museum: Gravity and Grace: Monumental Works by El Anatsui, curated by Kevin Dumouchelle.
El Anatsui has been shown at New York City's contemporary African art galleries since over 20 years, such as Skoto Gallery and the Contemporary African Art gallery. The first pieces I had seen, in the 1990s, and admired, were made of wood, and I still have a Newark Museum postcard I held on to since 2007. Several years ago, both Skoto Gallery and the Contemporary African Art Gallery staged a double exhibit of El Anatsui's new metal work, which is the art that finally made him famous worldwide, at the age of sixty!
The art  was so wonderful to behold that we all wanted a piece, even though none of us mere mortals could afford it, even then. "Weaving" together liquor bottle caps, he created giant shimmering, glittering tapestries, which from afar, resembled Ghanaian Ashanti cloth.
Fast forward a few years and El Anatsui's work is now shown at the Newark Museum, the Metropolitan Museum of Art, and now in this grand  exhibition at the Brooklyn Museum (and that's just counting a few museums here in the Northeastern United States).
El Anatsui was born in 1944 in Ghana, studied at the College of Art of the University of Science and Technology in Kumasi, Ghana. He studied European-style art, and it was later that he turned towards a more "Africanist" style.
He was a professor of sculpture at the University of Nigeria for 35 years, while simultaneously working on his art. He exhibited for many years in many countries and was certainly already a well-respected artist, but the fame he is now enjoying is certainly of another order.
In the Brooklyn Museum exhibition, there are a few pieces in yet another new style, albeit still in "recycled" metal. Should we call El Anatsui's art "green"? I would answer affirmatively... El Anatsui thinks that materials can be humble, and yet end up as a beautiful piece of art.
El Anatsui ships his pieces folded up, and it is the curator's choice how to display them, where the folds should be. He does not insist on determining how a sculpture should be shown; the curator uses her/his own judgment and sensibility. 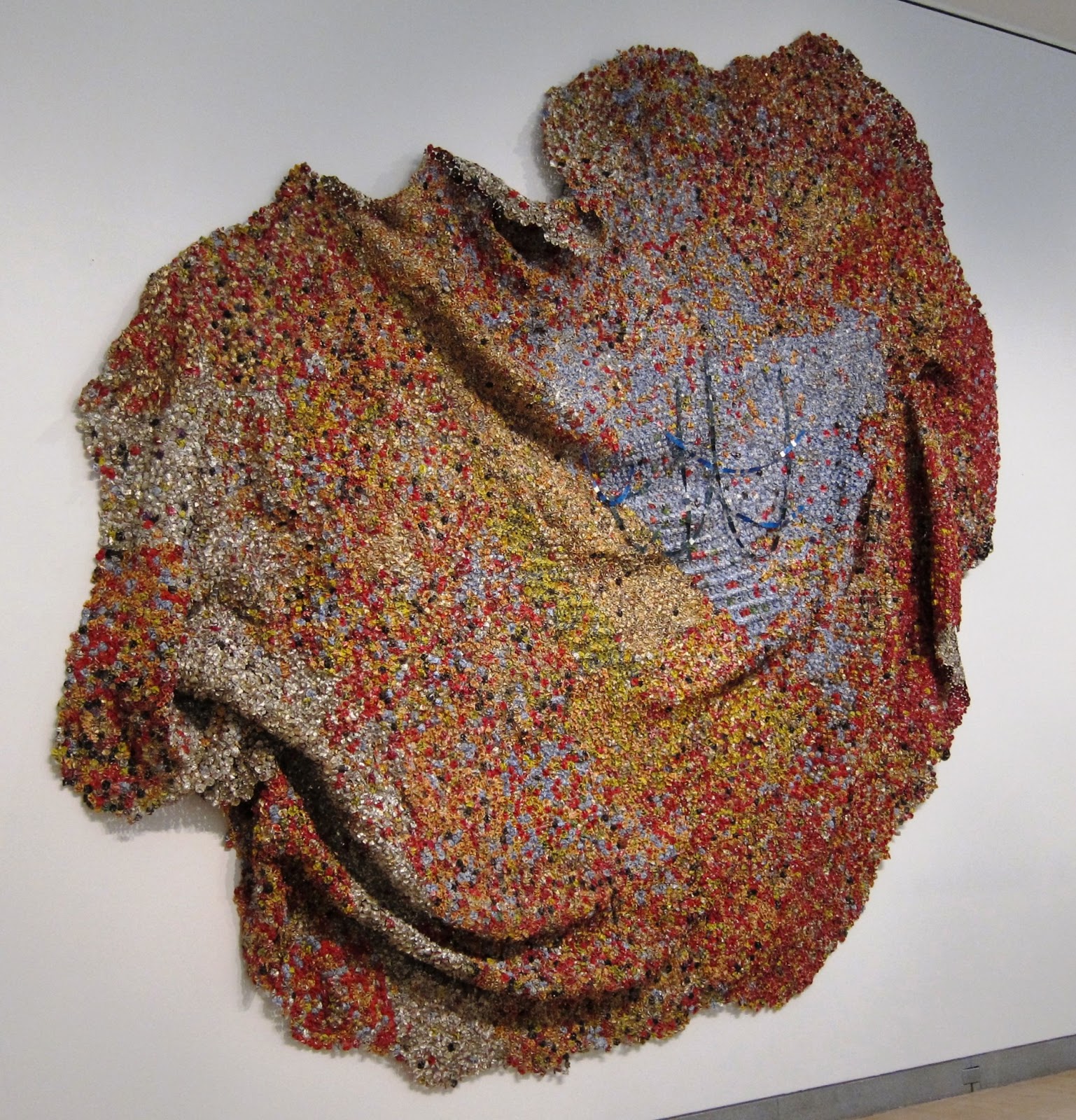 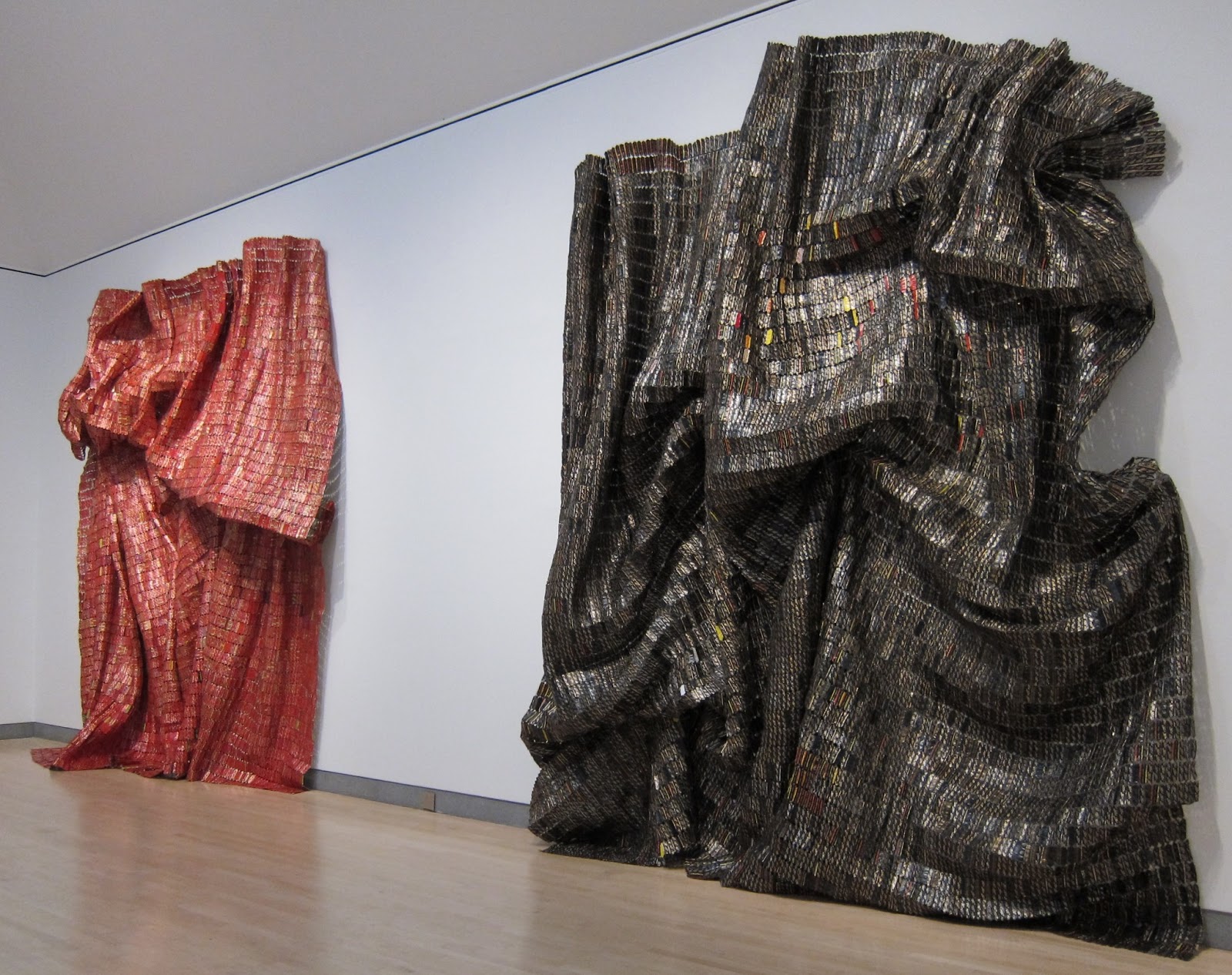 For further information:
Brooklyn Museum exhibition in the NY Times
El Anatsui at the High Line Park in Manhattan in 2013
Educator's Guide to the Museum for African Art exhibition "When I Last Wrote to You about Africa" 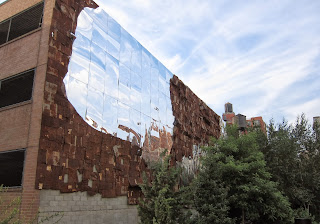 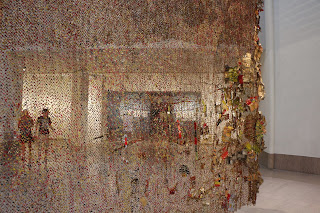 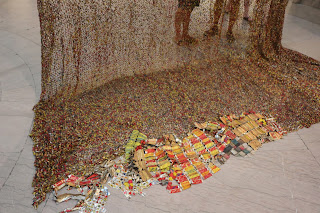 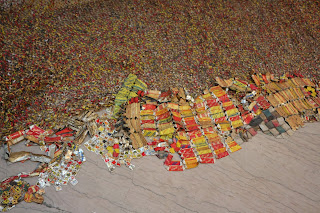 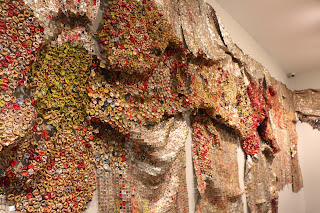 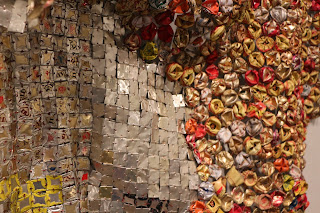 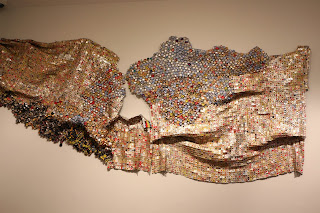 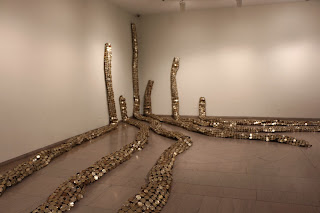