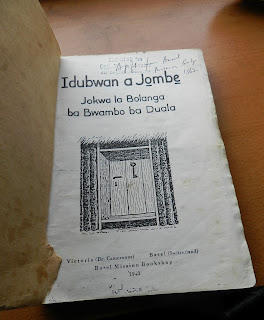 Having been raised in a multilingual household, and encouraged early on to learn the language of the country I happened to be living in, I planned on learning Duala, my husband's native language (albeit not his mother tongue, as his mother spoke Abo, and taught it to all her children).
It turned out to be a different kind of endeavor than in countries which have one main native language, such as Germany or Italy. Anyone could live their whole life in Douala without knowing a single word of Duala. Cameroon boasts about 200 languages, and the official languages are French and English (former mandate administrators). Most Cameroonians speak one of these two languages.
Moreover, Douala is now home to members of just about every ethnic group in Cameroon, as it is the commercial capital. The political capital is Yaoundé, further inland; it has about half the population of Douala.
Less than a hundred years ago, many Cameroonians (from the southern part) spoke Duala, which was the lingua franca in the area. Historically, Douala was the entry point when the first Europeans arrived. However, in recent years, the Duala-speaking population shrank to about 300,000 people. The lingua franca now is Pidgin English.
It was difficult to practice the language, as nobody would spontaneously speak to me in Duala, as I didn't need to open my mouth to be immediately perceived as a foreigner. Except for the people I knew personally, it was difficult for me to know who was a Duala speaker or not. My father's constant advice not to fear ridicule while learning a language was my mantra.
First I tried learning by listening and asking questions. However, this didn't work, as the structure of the language was unlike the languages I was used to and as my in-laws had not learned grammar, they couldn't explain what seemed to be inconsistencies to me. I started attending Friday evening adult classes at Collège Lieberman, a Catholic high school (in France, a Collège is a school that goes from 7th to 9th grade approximately; however Lieberman took its students all the way to the Baccalauréat, i.e. end of high school in the French system).
The students attending class were either foreign wives like me (mostly French), or members of other ethnic groups who wished to learn Duala. We had two teachers, and a slim book. It was not easy! Bantu languages are structured completely differently than Latin or other European languages. Singular and plural happen at the beginning of a word instead of the end: for example, an onion is "janga," onions is "manga." The rest of the sentence follows the same prefix, so you'll have sentences where all you hear is a series of "m," or "j"... unfortunately, I never reached a high enough level to be able to figure it all out, as I didn't get a lot of practice.
After 2 years of classes,  I acquired a general understanding of the language. I purchased the books for Bassa and Ewondo, also, out of curiosity. The structure for these languages, all in the Bantu family, was the same; Abo, my mother-in-law's language, was also similar; the vocabulary and the consonants used were different. I did not get a chance to study Bamiléké, which is a group of "semi-Bantu" languages, or any other the languages from North Cameroon, which were closer in nature to those of West Africa.